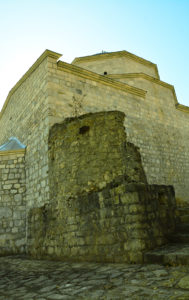 The main goals of the CLIO MAP project are to further increase and enrich the knowledge base on historical, social and cultural processes resulting in currently present heritage of Montenegro, determine its characteristics and current incarnations, as well to develop the new, digital tool (commercial mobile application) for their further valorisation. As well, the projected goals are to improve the human, research and scientific capacities and resources of the Historical Institute UoM, open space for engagement of young researchers, and provide a benefit to wider community through accreditation for education of guides for cultural tourism.

The realm of Montenegrin past, to which the topic of CLIO MAP project belongs, is generally treated by social sciences and humanities, such as history, history of art, theory and history of literature, law, linguistics, political science and economy. Although small by surface, the area of contemporary Montenegro has always been the scene of historical changeovers, clashes and blending of civilisations, cultures and ideologies, leaving for researchers an almost unlimited space for their pursuits. Researches in the domain of history assuming multidisciplinary approach are still rather the exception than the rule. Researchers have usually been oriented mostly to the most visible, political, diplomatic, military, economic, cultural or social aspect of the problem alone, rarely entering in its complex, tightly interconnected wholeness. The cultural and historical heritage and its treatment is a good example of such state of mind. Created in certain historical context, heritage is a unique blend of all mentioned categories shaped by the time flow, coming to contemporary times as both the link to the past, as well as being the current fact itself. Thus the dealing with it has an ambivalent nature, where is important to recognize the different categories of importance, interest, challenges and opportunities that are imposed before the researcher wanting to step into. It is usually treated as a relic, monument to passed and worthy only in terms of national, ethnical, religious, cultural and other self-definitions, without coherent, comprehensive and focused try to go beyond such simplistic approach.

The envisaged project activities will address a thematic domain that has, so far, been treated only sporadically and partially. It concerns dealing with the complex of historical context creating a certain category of cultural heritage, personified in the form of existing monuments and artefacts, which is supposed to be valorised through digitalization on the base of their authenticity, importance and attractiveness, for the purpose of its easier introducing to the wider scientific and general audience. The multidisciplinary effort to create a comprehensive, accurate, accessible and modern tool for understanding the number, categories, types, locations, condition, potentials and perspectives of major pieces of the country’s cultural and historical treasure, both in digital and printed form, presents something new and different within Montenegrin scientific community in the field of social and human sciences. The innovativeness of the project concept is not reflected only through tackling the previously marginally treated or fully untreated scientific aspects, but also in creation of different kinds of end products that will have much wider use. At this particular moment, simultaneous creation of mobile application, multi-layered GIS data base and printed atlas of Montenegrin cultural and historical heritage, presents a complete novelty that will provide a significant benefit to all. There is nothing similar currently existing in neither of mentioned domains, so the successful implementation of this idea will be a significant benchmark in sustainable valorisation of our national treasure.